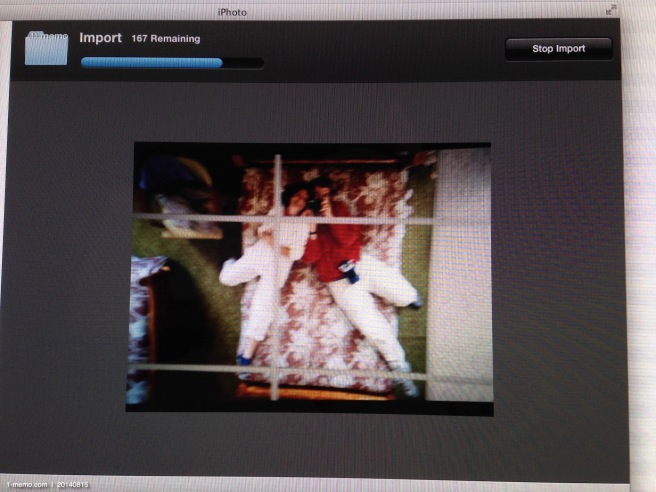 A flow of images passing by – here from Sportsman’s Inn, Killarney, Canada – during digital archiving while transferring some 30,000 copies of older – analogue – photographs and slides. And that’s not all – much more needs to be digitized. Of course many scans were made the regular way : using a flatbed scanner for prints, and a film-scanner for negatives and diapositives. But a digital camera can be very usefull for making copies ….
That digital Canon G3 that I mentioned in recent memo’s (August 1, 6, 7) was used as a daily camera between Aug 1, 2003 and the end of december 2005. The next 4 years that camera was still used but in a different role : that is, once in a while, for bulk copying photo prints in big albums that are difficult to handle on a flatbed scanner. Further because scanning of all slides was also taking so long …years .. a quick and dirty shortcut for making temporary copies of the remaining half of all my slides was used by taking photo’s with the G3 camera of those slides during projection on a screen.
The image shows the importing in iPhoto of a 1998 mirror selfie taken immediately after arrival in a hotel room in the Sportsman’s Inn, Killarney, Canada.
Comment : NO , at the time I was not aware of the dutch photographer Ed van der Elsken or his work and similar ‘Mirror above bed’ photograph .. that encounter would take another ~ 10 years.
Ceiling Mirror Selfie | 20140815 | 1-memo.com